DO WE EVER REALLY GET OUT OF ANARCHY?

The following is a response to the article, "DO WE EVER REALLY GET OUT OF ANARCHY?"
by Alfred G. Cuzan [Department of Government New Mexico State University].

Alister Cyril Blanc of @Alisteratwork (twitter) asked me for my thought on the above article found in pdf form here: http://t.co/u0ldQBO1

"A major point of dispute among libertarian theorists and thinkers today as always revolves around the age-old question of whether man can live in total anarchy or whether the minimal state is absolutely necessary for the maximi- zation of freedom. Lost in this dispute is the question of whether man is capable of getting out of anarchy at all. Can we really abolish anarchy and set up a Government in its place? Most people, regardless of their ideological preferences, simply assume that the abolition of anarchy is possible, that they live under Government and that anarchy would be nothing but chaos and violence.'"

"The purpose of this paper is to question this venerated assumption and to argue that the escape from anarchy is impossible, that we always live in anarchy, and that the real question is what kind of anarchy we live under, market anarchy or non-market (political) anarchy. Further, it is argued that political anarchies are of two types-hierarchical    or plural. The more pluralist political anarchy is, the more it resembles market anarchy. The performance of hierarchical and plural anarchies is evaluated in terms of their ability to minimize the level of force in society. It is shown that plural anarchies are much less violent than hierarchical anarchies. We conclude that the real question libertarians must solve is not whether minimalism or anarchy, but which type of anarchy, market or political, hierarchical or plural, is most conducive to the maximization of freedom."

Cuzan essentially makes the very astute point, that while within the geographical confines of the territory claimed by a State who attempts to coercively-monopolize the "legitimate" means of force within that territory, those that are "ruled" live under rulership, but the political-class, that set of persons operating the political-machinations are still, themselves, in a state of "anarchy" to one-another; Cuzan calls this a "political anarchy".  [Of course, the ruling-classes/sets of persons among all of the various political States, also operate towards one-another in a state of anarchy as well.]

Cuzan draws some figures to demonstrate the idea that within a minimal-State (a state that does only "essential" political things, like arbitration of disputes, i.e.: courts) the net violence/force within a society would be less than in a State-less society (what Cuzan calls "natural anarchy"). 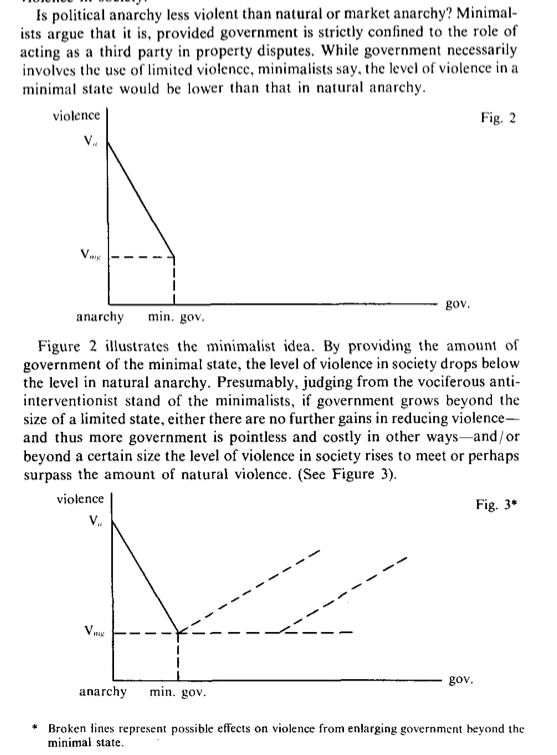 Darjeelingzen
A Radical-Liberal & abolitionist; advocating the consistent ethical treatment of all human beings; the abolition of all domination; Peace, Empathy, Liberty